Scientific and rational use of pesticides can not only achieve the purpose of preventing diseases, insects, grasses and rodents, increasing agricultural output, but also avoiding blindly increasing the amount of drugs used, reducing the cost of drugs, and reducing the harm of pesticides to people, animals and the environment. Agricultural measures that are consistent with the principles of safety, economy and effectiveness.

Appropriate application methods are important for reducing the amount of pesticides, reducing the number of medications, saving costs, preventing pollution and protecting agro-ecology.

1. Determine the application method according to the pesticide dosage form

Different pesticide formulations have their own specific instruments and methods of use. The application methods should be determined according to the pesticide dosage form. For example, emulsifiable concentrates and aqueous preparations are suitable for spraying, oils are suitable for ultra-low volume sprays, and powders and granules are suitable for seed dressing or sprinkling. Shi et al.

2. Select the application method according to the characteristics of the control object

The site of the control object is different, and the application methods are different. For example, the aphids and leaf mites on the back of the leaves should be sprayed; for the control of underground pests, soil treatment can be used.

Environmental factors have a great influence on the control effect of pesticides, and the application methods are determined according to specific environmental conditions. For example, during the rainy season, the dusting method can be used in the rainy interval; in order to reduce the relative humidity of the air in the greenhouse, the spraying method should not be used too much, and the dust method can be used.

5. Select the application method according to the characteristics of beneficial organisms

1. Determine the application time according to the characteristics of the control object

According to the biological characteristics of the control object and its occurrence rules, it is sought to apply the drug at the time when it is most likely to be killed. For example, protective fungicides must be used before or during the onset of the disease. Pests are generally used in the period of egg hatching or larval age, and the control effect is good. At the same time, we must fully consider the law of growth and decline of pests and beneficial organisms, pay attention to the protection of natural enemies, and give full play to the effects of pesticides.

2, according to the prevention and treatment indicators to determine the time of application

3. Determine the application time according to the climatic conditions

According to the climatic conditions, the appropriate time is used to improve the control effect, and the effects of temperature, wind and rain are greater. Such as rainy days, windy days and noon high temperature can not spray; in the morning when the dew is not dry, can not spray, the powdering effect is good; the poison bait to prevent underground pests in the evening is better. Only when applied under suitable climatic conditions can the best control effect be achieved.

4. Determine the application time according to the safety interval of pesticides

Third, alternate, rotate the use of pesticides

According to the occurrence characteristics of local pests and diseases and the supply of pesticides, several major insecticides with different mechanisms of action can be used for rotation and alternate use. Insecticides in the same type of preparations can also be used interchangeably, but those with relatively large chemical differences need to be selected for short-term use, and long-term use can also cause cross-resistance of pests. Varieties that have produced cross-resistance should not be used.

In the fungicide. Generally, systemic fungicides are more likely to cause drug resistance, and protective fungicides are less likely to cause drug resistance. Therefore, in addition to the rotation between the systemic agents of different chemical structures and mechanisms of action, a better rotation combination between the systemic agent and the protectant is preferred.

Mixed pesticides are prepared by mixing pesticide formulations containing two or more different active ingredients in the field. The pesticide mixture preparation refers to a pesticide preparation in which a pesticide factory mixes two or more kinds of pesticide active ingredients. Scientifically and rationally compounding pesticides, it can treat two or more contagious pests in one application, and expand the scope of prevention and control; the use of long-term supplements between mixed medicines can improve the control effect or delay the residual period; prevent and overcome the production of harmful organisms. Drug resistance, prolong the service life of pesticide varieties; can reduce the amount of pesticides, reduce the cost of prevention, reduce environmental pollution and harm to natural enemies.

Pesticide compounding can produce great economic benefits, but it should not be arbitrarily combined. The field should be mixed and used. It should be adhered to after mixing and mixing, and there will be no adverse chemical and physical changes between pesticides (flocculation or massive precipitation). Etc.), does not increase the phytotoxicity of crops, improve drug efficiency, reduce costs, reduce the toxicity to humans and animals, otherwise it will not only have no synergistic effect, but also may increase the toxicity, enhance the resistance of pests and other adverse effects.

How are modern steel beam bridges constructed?
Modern beam bridges that can carry road traffic and railroad are made of steel or reinforced concrete which can also be prestressed or post-tensioned. First step in building of a Beam Bridge is placing of cofferdams which are constructed around each column location in the riverbed.

Why is steel used to construct bridges?
Steel is an ideal material for bridges. It is an essential part of modern bridges because it is strong, can flex without fracturing and has a long life, even in the harshest conditions. It can be used to build bridges of any length because of its durability and ease of manufacture and maintenance.
How long do steel bridges last?
Bridges are typically designed to provide 30 years of service. The actual length of service depends a lot on the amount of stress the bridge is subjected to. 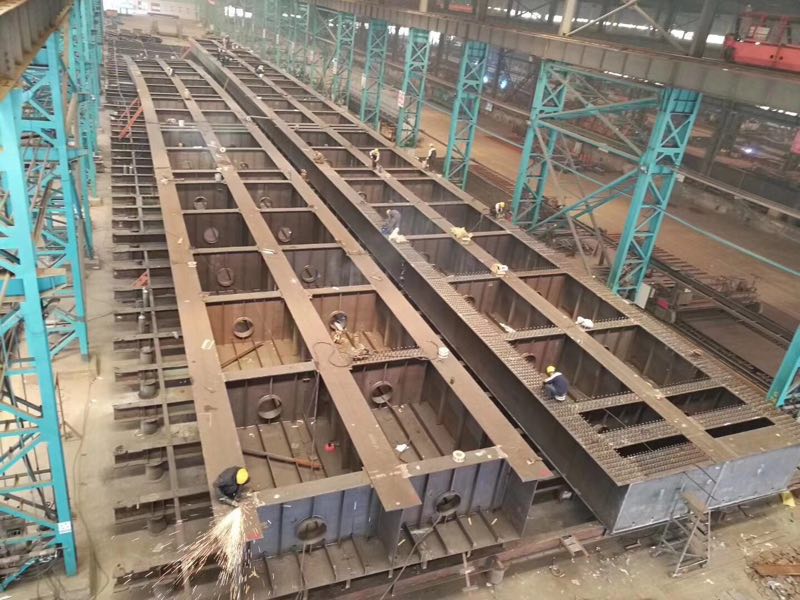